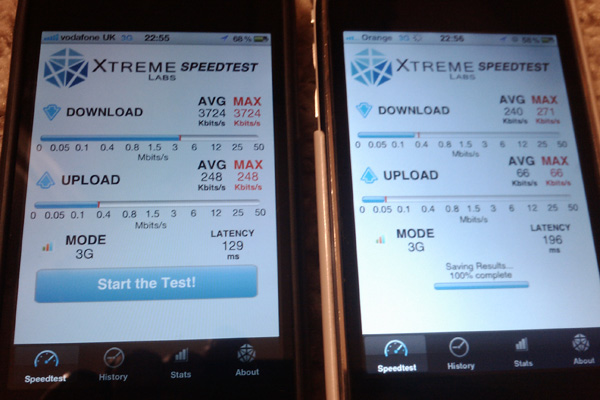 The data coverage and bandwidth in Nottingham on Orange has been dismal for quite some time. I actually spoke to them last week about this, and they said that they’re aware of issues in Nottingham, as there are too few 3G masts, and one of them is faulty. They were rather hoping that things would improve once they merged the T-Mobile network into theirs (apparently around the 6th October), though as far as I can tell, it hasn’t.

The photo below shows two speed tests, run on iphones, with the same app, at the same time. The one on the left is on Vodafone, and the one on the right is on orange. You can see the Vodafone download speed is around 3Mbits/sec, which is comparable to ADSL. The Orange speed, on the other hand, is 0.24Mbits/sec; this is around just 6 times faster than a standard dial-up connection.

One Reply to “Orange vs. Vodafone in Nottingham”